What is "Dalma" cabin?

We are introducing the first medium-climate cabin with infrared heating elements, sunshine and sunlight, Adriatic aerosol and aromatherapy effect. The cabin's specificity is in the integrated "Medi climate" technology that produces the effects of the Dalmatian climate and mimics the Mediterranean climatic climate. "It has long been known that a favorable climate prevents and treats many illnesses, and is unfavorable worsens. Climatic treatment is one of the oldest methods of treatment ".

Over the last twenty years, due to accelerated global warming, extreme and extreme weather changes occur daily, alternating the season without transient periods and daily temperature differences sometimes reach 15-20 ° C. These meteorological changes have a severe impact on a human body that is highly susceptible to changes in temperature, humidity, wind, air pressure, insolation, precipitation, positive or negative ionization of the air, especially when these factors significantly increase or decrease.

Human sensitivity to the influence of time is called meteoropathy and is defined as a group of symptoms and reactions that manifest when one or more meteorological factors change. Meteorological factors are the temperature and humidity of air, wind, atmospheric pressure, rain and thunder, and the ionization effect. Also, in the winter months, there is a phenomenon called "winter depression" due to the lack of sunlight in the winter months, which causes a very large number of citizens, especially those living in northern areas (above 45 s.). Disease was also diagnosed as a psychiatric diagnosis as "seasonal behavioral disorder".

Mediterranean climate has proved to be one of the healthiest on our planet, and staying in such a climate during the summer has a beneficial effect on a variety of health problems.

The Mediterranean climate is characterized by a dry, warm-hot and sunny summer. Winter is gentle and humid. Mediterranean air is rich in ozone, it contains sea salt particles, ie aerosols of water, and particles of flimsy plant components and algae that live alongside the coast.
FIRST MEDI-CLIMATE CABIN!

The value of the Dalmatian cabin is in its healing factors, which can be an integral part of any wellness, spa, health or tourist program and service. Ease of cab installation in any space for private and professional use in spa and wellness, apartments, hotels, sports clubs, retirement homes, etc.

This cabin can be used as a stand alone treatment for antistress and detox therapy and generally for relaxation and relaxation and can be combined with various saunas. Unlike the use of all other saunas, this cabin does not produce any contraindications and there is no limit on its use. 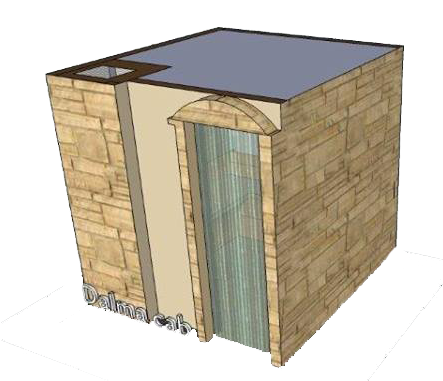